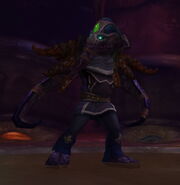 Yor'sahj the Unsleeping is the third boss (or second if killed before Warlord Zon'ozz) to appear in the Dragon Soul raid.[1]

Since the fall of the Bastion of Twilight, Yor'sahj the Unsleeping has eagerly assisted Deathwing, providing the Destroyer with the means to release more faceless ones from their prisons deep beneath the earth. Their numbers are endless and their power is beyond reckoning, and Yor'sahj intends to reap a grim reward for his faithful service.

Since the colors of the mounds in the environment correspond to the oozes that spawn from them, it may make coordinating the encounter easier by placing World Markers in front of the ooze spawn points.

Beginners should use two tanks who take turns to let the Void Bolt stacks fall off. Raids with more powerful healers and tanks can use a single tank if they can survive eight or nine stacks of Void Bolt.

When the oozes spawn, the raid leader can call out a single ooze so the raid can target and destroy it quickly. When one ooze dies, the remaining two become invulnerable and give the boss a buff or ability.

Black – Dark Globule
Yor'sahj spawns a large number of untauntable Forgotten Ones, which fixate on raid members. If the current Globule combination allows it, stack up on the boss and bring the adds down with AoE. Treating them as Blistering Tentacles from Madness of Deathwing and having the whole raid target them down is also effective.

Blue – Cobalt Globule
Yor'sahj creates a Mana Void that steals all the mana from mana users, i.e. healers and casters. Specs that have mana but not a "mana pool," such as a Protection or Retribution Paladin, are not affected. Once this globule is destroyed, the mana is returned to the players, divided among all players who are within 30 yards of the globule at its death (100 yards for LFR). Destroying the Mana Void is high priority for non-mana users, as they can continue to DPS without being encumbered by a lack of mana (assuming Digestive Acid doesn't punish the mana users for piling on the globule).

Green – Acidic Globule
Grants Yor'sahj with Digestive Acid. The raid should spread out to minimize the effect of the AoE caused when the boss uses this attack on a raid member. Note: Some guides say that the AoE component is removed from Raid Finder difficulty, but visual cues imply that the boss is hitting 10 people at once. Further observations should clear up this confusion.

Purple – Shadowed Globule
Grants Yor'sahj with Deep Corruption. The penalty this imposes on healers is somewhat onerous, making the Purple ooze the highest kill priority when it spawns. If Yor'sahj gets this debuff, healers must use only their largest heal spells, without casting unnecessary heals, in order to minimize the number of heals a player receives.

Red – Crimson Globule
Grants Yor'sahj with Searing Blood, which Yor'sahj uses to blast random players with a red chain lightning, causing damage corresponding with how far away the player is. Move in close to minimize damage.

Yellow – Glowing Globule
Grants the boss with Glowing Blood of Shu'ma, causing Yor'sahj to attack faster, including Void Bolt. Also, Void Bolt splashes affect the entire raid while the boss has this buff. Stacking for AoE heals is a good idea, unless a Green ooze is splashing the raid at the same time.

The simplest kill priority is:

If your healers have nerves of steel and your tanks know their cooldowns, you can use:

Typically, a single healer is designated as the Purple healer. This healer is chosen for his ability to land very large direct heals while avoiding overhealing.

With five colors of oozes, there are a theoretical 20 combinations. Not all combinations have been observed, however. The ones that have, are:

With this shortened list, a kill priority of Purple > Green > Yellow will suffice for normal difficulty and Purple > Yellow > Black covers the Raid Finder difficulty.

There are special cases of Purple, Blue, and a third color, that can be handled differently if the healers think they can handle the Deep Corruption without blowing up the raid:

This alternate strategy is a little dangerous, because as the Void Bolt DoT stacks on the tank, keeping him alive might trigger enough detonations to wipe the raid.

The biggest difference in Heroic difficulty is that four globules spawn each time instead of three. The raid kills one and has to survive the effects of three globule enhancements.

A tactical change is that you should not kill the first Mana Void that spawns. This Mana Void is treated as a battery to shorten the time necessary between the fabrication of a new Mana Void and the restoration of mana. When you know a Blue phase is coming, do some damage to the old Mana Void in preparation but do not kill it. When Yor'sahj actually creates a new Mana Void, destroy the old one quickly to restore the mana of all nearby players. The new Mana Void becomes the next mana battery.

It is common to use one tank and three healers in Heroic mode. As the healers' gear improves you can switch to two healers.

Healing in this fight can be very taxing. The single tank gets up to eight stacks of Void Bolt, and during Black phases, the Forgotten Ones are beating on the rest of the raid. Yellow and Black together results in two waves of adds, and it is important for the raid to be powerful enough to destroy the remaining adds and destroy one of the incoming bloods simultaneously. Your tank will be using survival cooldowns quite often, and timing can often be the difference between success and failure (although luck is usually a larger factor for beginners).

Our numbers are endless, our power beyond reckoning! All who oppose the Destroyer will DIE A THOUSAND DEATHS!

You will drown in the blood of the Old Gods! ALL OF YOU!

SEE how we pour from the CURSED EARTH!

The DARKNESS devours ALL!

Your soul will know ENDLESS TORMENT!

All praise Deathwing, THE DESTROYER!

From its BLEAKEST DEPTHS, we RECLAIM this world!

O, Deathwing! Your faithful servant has failed you!