Yorik Sharpeye is a level 91 rare tauren found in Vale of Eternal Blossoms. He is a Pandarian champion.

Yorik Sharpeye shares abilities with all other yaungol champions.

Yaungol champions are some of the simpler champions to defeat. They deal melee damage and have only one critical special attack. With a little situational awareness, they are easily beaten.

The most important yaungol ability is Hoof Stomp. Although survivable, it deals substantial damage to all targets within a 6 yd radius and also stuns for 2 seconds. Luckily it has a 2-second cast, and its area of effect is clearly marked by dust rising from the ground. When the champion begins to cast it, simply move out of the affected area.

If players try to move too far away, the champion will use Rushing Charge. This works similarly to warriors'

[Charge], knocking down the player for 2 seconds and inflicting damage. This has a minimum range of 20 yards, so by keeping within this range, players can easily ensure it is not used.

The final yaungol ability is Bellowing Rage. This increases the champion's damage done by 190%, but reduces his movement speed by 20%, lasting for 5 seconds. If incoming damage is of a concern, players can easily evade the champion during this period due to his reduced speed and the ability's 2-second cast, although make sure not to stray far enough to incur a Rushing Charge. Players strong enough to withstand the champion's melee attacks can generally ignore this ability, provided they do not fall prey to a Hoof Stomp; the combination of the two effects could prove fatal.

Yorik Sharpeye always drops one of the following:

And has a chance to drop one or both of the following:

As a Pandarian champion, defeating Yorik Sharpeye is part of the following achievements:

Mr. Smite, as previously seen in the Deadmines. 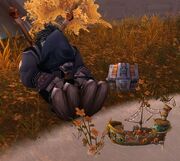 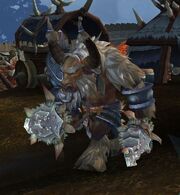 Yorik may really be Mr. Smite in disguise. Yorik's aggro quote "You! What are you doing here?" implies he has met the player before, and in a different place. Yorik also has a very similar voice to Mr. Smite, and his clothing and coloration also appear very similar. Most notably of all, Yorik drops

[Mr. Smite's Brass Compass], his possession of which is otherwise hard to explain. Yorik is also found near a treasure chest and a miniature boat, both of which may be references to Mr. Smite being on the Defias juggernaught in the Deadmines.

Despite sharing abilities with yaungol champions, Yorik also appears to be a tauren, and not a yaungol. Key differences include Yorik's lack of the large upward-pointing horns possessed by yaungol champions, as well as other features such their large nose rings and hairy manes on their shoulders, arms, and legs. He also sports very simple bracers similar to those of Mr. Smite, as opposed to the large, chunky bracers worn by yaungol.

Yorik's name may be inspired by the deceased character 'Yorick' from William Shakespeare's Hamlet, the discovery of whose skull evokes the well-known monologue beginning "Alas, poor Yorick! I knew him, Horatio." This choice of name may in itself be referring to Yorik's "previous life" as Mr. Smite.

If Yorik is indeed Mr. Smite, this leaves a significant amount of room for speculation as to how he arrived in Pandaria in his current incarnation. Apparently slain by adventurers in the Deadmines, Mr. Smite's re-appearance suggests that he somehow survived the encounter, and managed to find his way to the new continent - as early, if not earlier, than the Alliance and Horde adventurers. It can be speculated that his possession of yaungol abilities suggests some connection with the yaungol, perhaps involving training with or even adoption into a yaungol tribe. Nonetheless, Yorik is found alone in the Vale of Eternal Blossoms, far from the nearest yaungol settlements. Yorik is also neutral when encountered, unlike almost all yaungol in the game, suggesting he may not share their sha-infested rage. Regarding his change of name, it is possible that Yorik Sharpeye is in fact Mr. Smite's true and original tauren name, with the latter merely a nickname taken on when joining the Defias Brotherhood; alternatively, Mr. Smite may simply have invented the new name in order to escape his past. Regardless of whatever long and arduous travels may have led Mr. Smite to his new home in Pandaria, it is sadly not long before adventurers find him again, once more determined to prise his precious booty from his cold, dead hands.

He may be related to Bardu Sharpeye and/or Hark Sharpeye.