Yu'lon in the Vale of Eternal Blossoms during one of N'Zoth's assaults.

“There is but one certainty - every end marks a new beginning.”

Yu'lon the Jade Serpent is one of the four creatures known as the August Celestials who watch over Pandaria. Yu'lon watches over the Jade Forest. She is the spirit of wisdom, but also represents spring, youth, growth, and nurturing.[6] She occasionally disguises herself as a pandaren girl named Fei.

Long ago, the titanic watcher Keeper Freya gifted her walking stick, fashioned from one of the branches of Fu Zan the first tree, to the August Celestials, and Yu'lon vowed to keep the staff safe. For thousands of years, even during the dark reign of the mogu empire, she did just that. Yu'lon suspected that, if Fu Zan would pass to someone, it would go to a jinyu or a pandaren since she considered the hozen to be too innately violent to be trusted with such a gift. They were often selfish and shortsighted, unable to work together long enough to build a proper civilization of their own. But as time passed, Yu'lon questioned her assumptions. There were different forms of wisdom and courage. It was easy to see the short-lived, short-tempered hozen as troublemakers, but they lived full lives-wild lives-in the years they had. Yu'lon felt Fu Zan begin to awaken. It needed a new companion. The Jade Serpent knew that soon she would honor Freya's wishes and allow a worthy mortal to carry Fu Zan. And she was becoming certain that it needed to be given to a hozen.

Freya's words became clear the moment Yu'lon laid eyes upon one exceptional and uniquely clever hozen. He called himself the Monkey King. Yu'lon could see the Monkey King's motivation. It was simple: he disliked the sight of blood. At the most fundamental level, this was a creature who loathed battle and loved peace. And from that, he had achieved what no other hozen ever had. Yu'lon needed to know how deep the Monkey King's cleverness ran, so she visited him in disguise. All the Monkey King saw was another hozen, but this one did not call him king or bow before him. He demanded that she show respect. Instead, the newcomer asked him a riddle, telling him that a true king would have no trouble answering it. He snapped out the correct answer in seconds. She gave him another. He answered again. On and on they went, for three days and three nights. The Monkey King grew enraged, but even in his anger, he continued to answer her questions. Yu'lon was convinced. Violence and tyranny were not in the Monkey King's nature, or he would have tried to shut her up with force long ago. She revealed her true form-which caused considerable chaos in that hozen village-and presented him with Fu Zan, the Wanderer's Companion. The Jade Serpent told him the story of Freya and how the staff had come to be. Then she warned him: she sensed that, one day, his cleverness would not be enough to stop evil. When that day came, he would need to act decisively. The Monkey King did not believe her.[7][8]

During Lei Shen's conquest of Pandaria, he and the mogu overpowered the four August Celestials. Yu'lon was the last Celestial to remain uncaptured, and she spread wisdom to the pandaren of the Jade Forest during their time under the mogu empire. During a visit to one of the slave camps, Lei Shen sent a bolt of lightning streaking across the sky that pierced Yu'lon's body and sent her crashing to the earth. Yu'lon awoke underground, where the pandaren had secreted her away to a hidden cave built in honor of the August Celestials. The Jade Serpent, so moved by what she saw, imbued the place with her magic to help the miners find the wisdom, hope, fortitude, and strength they had lost in life. But she was dying, and so she requested that the pandaren build a statue of her.

For a hundred years, generations of miners toiled. All the while Yu'lon, still wounded from the Thunder King's attack, drew closer to death. At the moment when the work finished, she breathed her last breath. The miners wept that they'd failed to save her, but the statue moved and its eyes opened; Yu'lon had been reborn through the statue, and to this day she still must reincarnate through a new statue when she grows weak.[9]

When Shaohao climbed up Mount Neverest, the Jade Serpent appeared before him. Shaohao needed to know how to keep his land and people safe from the Sundering. She told him to go to the center of Pandaria and find the answer within.[10] 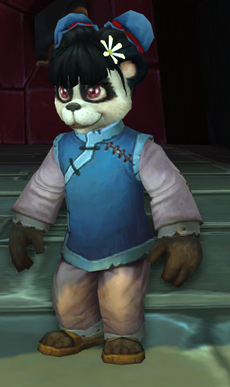 Yu'lon in World of Warcraft.

Fei is a pandaren girl illusion used by Yu'lon to test the adventurer in the Jade Temple,[4] and later in the Serpent's Heart after completing the main storyline of Jade Forest and takes the adventurer to Valley of the Four Winds.

Every hundred years, an enormous jade state is built in the temple grounds, so Yu'lon can transfer her life essence into the sculpture, which would then turn into a new being. This cycle has been going for generations.[11]

Yu'lon and the other three Celestials opened the gate to the Vale of Eternal Blossoms.[12]

She also granted her powers to the Golden Lotus warriors when the mogu invaded the vale after the death of Zhi the Harmonious.[13]

Temple of the Jade Forest

During the encounter with Liu Flameheart, roughly around 30%, she summons Yu'lon to defend her. After Yu'lon is defeated, she frees the priestess of all doubt, killing her and flying off.

As part of Wrathion's legendary journey, he and an adventurer visited the Jade Serpent in order to receive her blessing.[14] 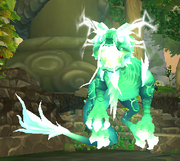 The trial of Yu'lon is a test of wisdom and faith. With omens of a bleak future floating through his mind. Emperor Shaohao climbed to the summit of Mount Neverest to seek the counsel of the Jade Serpent. Yu'lon urged Shaohao to cast off the dark emotions that plagued him, and through his trials, Emperor Shaohao would become one with the land. To pass the trial of the Serpent, warriors must be wise in their choices.[15]

[90] Why Do We Fight?, the celestials alongside the ghost of Shaohao, Lorewalker Cho and adventurer gathered around to begin to heal the Vale. She flies around in a circle after the tree was planted upon the ground to begin the process of healing Pandaria.

After some time, the Monkey King sensed that his travels with Fu Zan were nearing their end. So, he traveled to the temple of Yu'lon and passed the staff back into her care so that one day it can again be given up to another who is worthy to wield it.[7]

Yu'lon and other Celestials chose to hold a trial involving the members of the Alliance and Horde rather than sentence Garrosh Hellscream among themselves. During the trial, Yu'lon took the form of the Panda cub from the Jade Forest as a show of respect to the gathered races.[16] 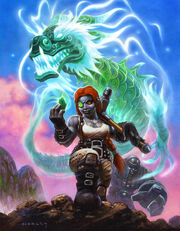 Disguised as Fei, she led Fenella Darkvire, Carrick Irongrin and Fendrig Redbeard to the same 'mine', of which none where happy with.

Later on, the dwarves learned of how Yu'lon inspired the pandaren miners to seek knowledge and escape the mogu's grip, and of the hidden refuge the pandaren had built underground to worship the Celestials in secret. After Emperor Shaohao's teachings and the Great Sundering, the miners' descendants would build the great temples in honor of the celestials and founded the order of the August Celestials to uphold their teachings. The three masons realized that the 'mine' Fei had sent them to was the very refuge that Yu'lon experienced the death of her natural body.

When they returned as friends from their journey, Fei revealed her true form to them and they watched her fly away until she was a vein of jade in the diamond sky.[9]

Yu'lon can be summoned by an item called

[Scroll of Invoke Yu'lon, the Jade Serpent] during Ashran battles.

During The Trial at the Temple.

When the Burning Legion invaded the Temple of the Jade Serpent, Yu'lon was wounded. She was aided by the Monkey King, Priestess Summerpetal, and the Grandmaster of the Order of the Broken Temple who defeated the attacking demons and healed her. Renewed, they all entered the Heart of Jade and attacked the leader of the assault. While the mortals fought against Lord Korithis, Yu'lon faced Yigthregor. Zpon Korithis's death, the grateful Yu'lon bestowed

[Fu Zan, the Wanderer's Companion] upon the Grandmaster and transported them to the Temple of Five Dawns on the Wandering Isle.[17]

During the Assault in the Vale of Eternal Blossoms by N'Zoth's forces, Yu'lon is seen patrolling the skies.

The Burdens of Shaohao Part 1—Doubt
Yu'lon: What troubles you, young emperor?
Shaohao: Countless demons will soon pour over Azeroth! What must I do to save my kingdom?
Yu'lon: Seek out the heart of Pandaria, for the answer lies within.
Shaohao: But how can I find it?
Yu'lon: Your emotions cloud you. Free yourself of these burdens, let the land be your teacher.

Main article: Why Do We Fight? (quest)#Notes

As Fei
Hey there!

<The little girl squints at you.>

I overheard you talking to the Elder Sage. He's pretty serious, isn't he?

Well you're in luck, because I hear just about everything that happens around here.

Ashran
Come close heroes, and let me heal your wounds.

Main article: The Trial at the Temple#Notes

[Pearl of Yu'lon] Archaeology artifact used to refer to Yu'lon as male. While it's possible this was simply an error by Blizzard, it may have suggested that Yu'lon may get reincarnated as either male or female, even if her current incarnation is female. This was eventually corrected in patch 6.0.1, so presumably it was the former rather than the latter.