Zek'voz is a boss in Uldir.

Shortly after the Sundering, a dark messenger arrived on the fresh shores of Zandalar, intending to bring the newly isolated tribe into the service of N'Zoth. Zek'voz was prepared to entice, bribe, cajole, corrupt, or simply kill them, but he was not prepared to encounter the defenses of Uldir. He was captured, studied, disassembled, and stored in the Titans' Archives, where he has waited for a chance to escape. 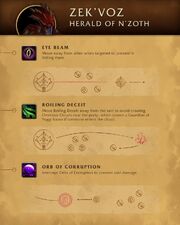 Overview of tactics for the Zek'voz fight.

Intro
MOTHER yells: Now entering the data vault. This is a comprehensive collection of titan knowledge.
MOTHER yells: These discs currently contain 50 norgabytes of biological data on known lifeforms throughout the cosmos.

Surging Darkness
Ug' crish zul Thraxas!
You will be eradicated!

Wipe
Naza bul rexil qalic ul'.
Not a single worthy trait among you.

Death
Hul bala miz rilakich...
How is this... possible...