Not to be confused with Sekhan.

Zekhan is a jungle troll shaman who participated in the Battle for Lordaeron. He is the son of Hekazi, who fought in the Third War alongside Varok Saurfang. His father told him tales about Saurfang and how he could slaughter ten enemies with a single blow. Zekhan eventually joined the Horde's war effort.

He later became a companion of Varok Saurfang into his self-imposed exile; acting as one of the few Saurfang trusted during that time. He remained at the High Overlord's side until Saurfang's death, inspired to carry on his legacy. He later became a Horde ambassador in Zandalar. 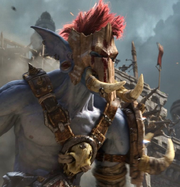 Zekhan in the Battle for Azeroth cinematic.

Zekhan comes from a small jungle village on the shore of the Echo Isles.[5]

On the eve of the battle, Zekhan found Saurfang atop the keep's walls, observing the camping Alliance forces. Zekhan asked him for advice since this was to be his first battle and told him about his eagerness to die with honor and glory. Saurfang's only advice to him was not to die, and he added that there was no honor or glory in this war. The orc then went to meet the Alliance head on and alone, but Zekhan rushed to him and convinced him to live another day by returning Dranosh's necklace that Varok had left to burn on the walls. Varok took it, the same way he retrieved it from Dranosh's body, and returned back behind the walls just as the battle began.[6]

In front of Lordaeron Keep, he charged, along with the rest of the Horde soldiers, inspired by Saurfang's battle cry, who took up the Horde banner and pushed forward.[7]

At the climax of the Siege of Lordaeron, Saurfang was captured by the Alliance and imprisoned in Stormwind Stockade. He refused to go with the Horde when they broke into the prison, saying he would never return to the Horde as long as Sylvanas ruled it.[8] Some time later, Saurfang broke out of his cell via the sewers and traveled into Redridge Mountains, where he ran into Zekhan. Knowing that Sylvanas would send assassins after him, Saurfang told Zekhan to watch the Redridge Pass for any sign of Horde agents and to warn him if there were. With that Saurfang continued into the Swamp of Sorrows and set up camp at Misty Reed Farm. Zekhan would later run into a Horde adventurer who had trailed Saurfang alongside Dark Ranger Lyana on Sylvanas's orders. After imploring them for to aid Saurfang, the adventurer can choose to aid Zekhan in his mission or refuse.[9]

Those who choose to aid Zekhan are informed that Lyana was sent to kill Saurfang and faced with this knowledge the two rush to Saurfang's side.[10] Lyana accused Saurfang of turning his back on his duty and then conspiring with humans against Sylvanas. Zekhan and a Horde adventurer arrived and stood by Saurfang after all he had done for the Horde.[11] When Lyana and her forces were killed, Saurfang told Zekhan and the adventurer to return to Orgrimmar and make it look like Saurfang escaped, to keep the adventurer in Sylvanas's favor, and so Zekhan could spread the word in Orgrimmar that those who wish to restore the honor of the Horde must not give up hope. Promising his friends to see them again, Saurfang traveled further west into the swamp.[12]

Those who reject Zekhan's mission instead report to Sylvanas Windrunner, who after being informed of the situation remarks that she has special plans for Zekhan.[13]

Zekhan and the Orgrimmar orphans.

Zekhan staunchly supported Saurfang in his revolution against Sylvanas.[14] Residing outside of Saurfang's command center, he was present as the revolutionaries and the Alliance secured the Dranosh'ar Blockade. Before the final battle against Sylvanas could commence, Saurfang recognized that the loyalist soldiers were also fellow brothers and sisters of the Horde. Unwilling to spill more Horde blood, Saurfang challenged Sylvanas to Mak'gora. As Saurfang and Sylvanas prepared to do battle, Zekhan approached to help, only to be stopped by Thrall. Zekhan, among the countless present, bore witness to the duel between Saurfang and Sylvanas. Where, upon gaining the upper hand, Saurfang was able to force Sylvanas into admitting that the Horde meant nothing to her. In a final act of treachery, Sylvanas killed Saurfang and abandoned the Horde. The remainder of Sylvanas's forces surrendered to the revolution and Alliance forces, reuniting the Horde. In the aftermath of Saurfang's death, Thrall, Zekhan, and Anduin Wrynn carried his body into the now open gates of Orgrimmar.[15]

Along with most of the Horde, Zekhan attended Saurfang's funeral.[16] Despite knowing that Saurfang's death was a possibility, it did not make accepting the loss any easier. The troll saw Saurfang as an inspiration, a symbol. Saurfang drove Zekhan to be better and stronger, like his father before him. Zekhan declared that it was time to live up their examples and to make them both proud. With that, he decided to visit the Orgrimmar orphanage and recount stories of Saurfang to the orphans.

Zekhan appears in the Vision of Orgrimmar where he is helping fellow shaman.

Zekhan attended a Horde Council meeting where he served as Thrall's page. The meeting was ultimately adjourned by Thrall due to the friction between the council members. In the aftermath, the loa of death Bwonsamdi, sensing a threat against Talanji's life, guided Zekhan into saving her when he pushed him into a Zandalari servant who was carrying poison for Talanji. Zekhan quickly noticed the poison and helped to fend off the assassin. Then at the Western Earthshrine, he was telling children about it, when he was recalled to Grommash Hold. With everyone being unaware of what Bwonsamdi had done, Zekhan was declared a hero with Rokhan going as far to declare that he had the reflexes of Kimbul. Soon afterward, the Horde Council empowered with him the critical mission to aid Talanji and help uncover the rising threat against her.

Thus, he traveled to Dazar'alor to serve as the Horde's ambassador. General Rakera of the Zanchuli Council accused him of being a spy, to which Zekhan admitted that he was. He stated that the Horde simply worried about Talanji as they want her friendship and won't be giving up on her. Talanji declared that they could have sent worse, noting privately to herself that they could have Thrall, whom she might never trust for his stubborn loyalty to Jaina Proudmoore. Though tempted to send Zekhan away, Talanji decided to give him a chance which proved beneficial when he later aided her against a second assassination attempt by a war band of the Widow's Bite.

As Talanji and Zanchuli Council discussed the threat, Bwonsamdi declared that he and Zekhan made quite a team, referred to him as little zappy boy, and thanked for him protecting his investment. After remarking that there was a sickness in the Horde and his own realm, he offered Zekhan a bargain; if Zekhan took a vision of death from him, then the troll would make sure that one thing would happen. After a moment of thought, Zekhan agreed and was informed that he must ensure that the Zandalari remain with the Horde, Talanji must sit on the council, and to make her see that this was the best for Zandalar, and even better best for Bwonsamdi. The loa then granted Zekhan a vision of how Varok Saurfang reunited with his loved ones.

After Zekhan reported the second assassination on Talanji to the Horde Council, Rokhan personally arrived to Dazar'alor in order to help Talanji against the Widow's Bite. Though Zekhan felt that he failed to get Talanji to call upon the Horde for aid, Bwonsamdi remarked to him that the Zanchuli Council and Bwonsamdi himself saw something powerful in him, while telling him not to give up. Soon after, he became caught off by the arrival of Thrall and Ji Firepaw who revealed that they had uncovered that the Widow's Bite were working together with the Banshee loyalists of Sylvanas Windrunner. This motivated Talanji to call her forces for direct battle against the threat by ordering them into Nazmir as well call on the Horde for aid.

Zekhan decided to join the Zandalari Empire forces moving into Nazmir, where they discovered their enemies attempting to sacrifice children in order to weaken one of Bwonsamdi's shrines. Thanks to his courage, the children were saved, and due to their smaller amount of numbers, the loyalists and their new allies fell back. However, as the battle ended, the tar was lit and the flames engulfed Zekhan, his soul falling into the Maw. Bwonsamdi subsequently yanked him from the Maw and placed his soul back into his body. Once Zekhan awake, he realized that Bwonsamdi had sent him a false vision of death, and it was then that the loa revealed to Talanji and Zekhan about the Maw, how everyone was going there now, and it was taking all he had left just to keep as many trolls away from there that he could. The children he had rescued went on to call him the Light of Shoal'jai.

Due to his injuries, Zekhan would be forced to remain in Dazar'alor, as the Horde and Zandalari ultimately defeated their enemies and saved Bwonsamdi. He soon joined the Horde in celebrating their victory and was pleased to learn that Talanji would be taking her place on the Horde Council. Talanji personally wished him farewell where he revealed that it was a pleasure to serve and that he hoped to meet her again. She then declared that when Zandalar was strong, she would personally come to Orgrimmar to visit him.[2]

Zekhan, joined by Rexxar and his animal companions, will make the perilous journey across the lush and vivid reaches of Kalimdor to learn the secrets of the realm, and will share one final kindness with a friend along the way.[17]

In the Swamp of Sorrows.