Zenn Foulhoof is a quest giver located east of Dolanaar in Teldrassil.[60.4, 56.3] 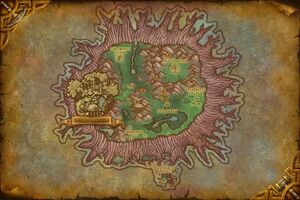 He also appears hostile in Darkshore.

Zenn, strangely classified as a humanoid, is friendly to Alliance players, but is still up to no good. The night elves council of Dolanaar punished him for some minor misdeed by having adventurers gather and feed him corrupted fruit found around the area (which results in a humorous transformation into a frog). They did not kill him, like most satyrs, but he is later chased out of Teldrassil for performing perverse magic.

Zenn Foulhoof takes up residence in a cave near Cliffspring Falls, Cliffspring Hollow, allied with the grell under Licillin and Apothecary Furrows. Here he has been correctly classified as a demon. Zenn is discovered to have been behind the taint that is corrupting the local wildlife, specifically bears and rats. As a result, you are tasked with killing Zenn in the quest

[5-30] The Corruption's Source. In this location, he is aggressive to all players regardless of faction.