Zereketh the Unbound is a powerful voidwraith and the first boss of the Arcatraz in Tempest Keep.

Most creatures from the Twisting Nether require constant directions from their masters, but a select few voidwraiths need no such orders. Zereketh stands at the entrance to Arcatraz, ready to slay all who would dare challenge him.

The fight is very simple, stay away from the Void Zones. Seed of Corruption can be healed through, although this is rarely an issue. If you get the Seed of Corruption, move away from the rest of the group to avoid unnecessary damage to party members. Also, don't stand near people with the debuff. In normal mode, ranged DPSers can avoid his Shadow Nova (~34 yards range) by being at max range. In Heroic mode, his Shadow Nova's range is increased to 45 yards, though. It is imperative that you get out of the Void Zones as quickly as possible, because as soon as they spawn it is instant damage for 1200-1300 every second.

It is advisable for the MT to tank the boss with his back to a wall and just move up or down the wall as the void zones appear. This is to avoid getting knocked out of range of heals when Zereketh does his knockback.

Note: the void zones tend to be spawned underneath random players in the party including the MT, everyone needs to be wary of them. Valid targets for void zones also includes totems and pets. If at all possible, spread pets and totems out. Totems are immune to the void zone damage.

Having shadow resist on the Main tank on this fight makes the boss a lot easier, at 300 Shadow Resist the combat log showed the main tank taking 300-500 damage a hit with roughly 1100-1300 resisted. This set can consist of any armor class just like the pandemonious fight. 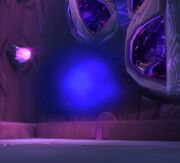