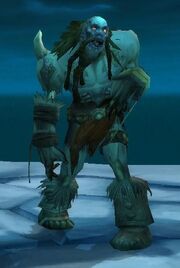 Zombies are a variant of the undead. Most common zombies are humans and trolls, but goblin and high elven zombies have also been encountered.

During the Scourge Invasion, adventurers could be transformed into zombies. Others were tasked with bringing back the brain of a zombie for study.

Like ghouls, zombies were once men, peasants, and warriors alike. They lack a lot of the intelligence their risen comrades do, even in comparison to abominations. Slow moving and instinctual, you can find these creatures within the areas either once or still under Scourge control.

Zombies, due to their lack of intelligence and their numbers, are often used as fodder in the front lines of the Scourge. Most do not seem to be affiliated with any group and just mindlessly wander.

Some Zombies have managed to be part of the Forsaken and seem to have rational thought.

Zombies are nothing more than animated corpses. Zombies are often brought to horrifying unlife to serve as frontline troops for the Lich King's armies. Zombies are often plague carriers, infested with all manner of parasitic creatures. Their bodies are in a suspended state of decay, their flesh perpetually sloughing away or peeling aside to reveal bone and desiccated organs. Of all the undead, zombies are one of the more horrific varieties, for their lack of free will is all the more apparent in their pitiable state of their bodies. Even more horrible is the fact that not all zombies lose their memories and personalities — a few zombies retain their memories, trapped within a decaying corpse compelled to serve their former enemies. Every so often, a zombie retains its intellect or develops a form of sentience over long years. No one has been able to create this circumstance intentionally, nor does anyone understand why or how it happens.[1] 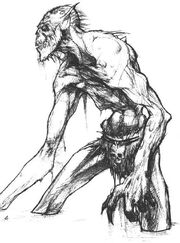 A zombie in the Manual of Monsters.

Zombies are the lowest form of existence in the undead food chain and are often overlooked because of their simplicity and lack of ambition. These undead are created from plague-infected individuals, but their bodies are not as riddled with the disease as those of more powerful undead. In fact, zombies not only retain their mortal memories, but also are occasionally capable of retaining the original personality and morality of their mortal life. This does not often aid them, however, and usually is a torment to the zombie trapped within Ner'zhul's vicious armies. Zombies are despicable, degraded creatures with little purpose other than to serve as cannon fodder for Ner'zhul's massive forces. They are sorrowful creatures, capable of great strength but holding little hope for salvation other than their own deaths. Occasionally, one breaks free of the necromantic control imposed by Ner'zhul's forces and escapes — but he is not accepted into society nor offered a chance for peace through proving that he is more than a ravening undead creatures. Truly, these are beings to be pitied.[2]

Zombies are corpses animated by necromancy. The creature was once human, but now stares ahead with dull, lifeless eyes. Bits and pieces of dead flesh hang from its body as the walking corpse slowly plods forward. Most zombies have no memories of their lives and are capable only of obeying simple commands, such as “Attack!” or “March!” Their unthinking obedience makes them perfect tools for frontline assaults, for their plodding onslaught is both demoralizing and relentless. Rumors say that not all zombies are so lucky as to have no memories. Some retain full knowledge of their pre-death identities as well as their knowledge and skills. These memories do them no good, however, for they remain under the control of the Scourge, forced to obey their masters' commands and to suffer their existence within their own decaying corpse. These creatures are objects of pity, but no less dangerous than their mindless fellows. Zombies without memories have no speech, though they can make meaningless sounds. Intelligent zombies know the same languages they did in life and can sometimes manage halting speech.

A zombie's approach to combat is simple: It attacks whatever enemy it is ordered to attack and does not stop until it is destroyed. Some zombies use weapons (such as clubs) if they have them. If not, they use their slam attack. Zombies neither attempt to dodge nor do they retreat.[3]

"Zombie" is an acquired template in the Warcraft RPG.