Tanaris used to be a jungle and territory of the Gurubashi Empire, and Zul'Farrak was a city there. When the Great Sundering shattered the ancient landmass, the area swiftly became the desert of Tanaris. The Farraki tribe of trolls were stranded here and eventually adapted to their harsh new environment, becoming sand trolls.[3]

From the World Dungeons page on the official World of Warcraft Community Site: This sun-blasted city is home to the Sandfury trolls, known for their particular ruthlessness and dark mysticism. Troll legends tell of a powerful sword called

[Sul'thraze the Lasher], a weapon capable of instilling fear and weakness in even the most formidable of foes. Long ago, the weapon was split in half. However, rumors have circulated that the two halves may be found somewhere within Zul'Farrak's walls. Reports have also suggested that a band of mercenaries fleeing Gadgetzan wandered into the city and became trapped. Their fate remains unknown. But perhaps most disturbing of all are the hushed whispers of an ancient creature sleeping within a sacred pool at the city's heart - a mighty demigod who will wreak untold destruction upon any adventurer foolish enough to awaken him.

During the Elemental Unrest, the city was entered by the Horde and Alliance to kill Kai'ju Gahz'rilla.

By the time of the Cataclysm, Zul'Farrak had become a wasteland.[4] The surviving Sandfury joined the Zandalari. 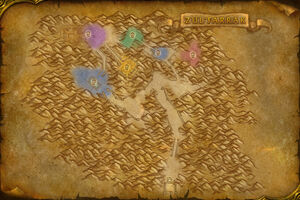 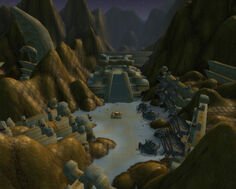 The pyramid of Zul'Farrak, part of the troll rush event.

Zul'Farrak is a big circle, so the end boss can be done before most of the mini-bosses. Chief Ukorz Sandscalp can only be reached after defeating Nekrum at the end of the Pyramid Battle. Talking to the goblin before Sergeant Bly, therefore, most parties classify him as the "End Boss". Gahz'rilla can be done before or after the Pyramid Battle/Sergeant Bly/Chief Ukorz Sandscalp, so in some sense, he can also be the "End Boss". Nevertheless, it's a technical thing. Zul'Farrak is one of the first instances you may use your mount in, due to it being an outdoor instance. 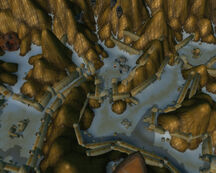 A good group composition would require a tank, an adept healer and an AOE, mage being the best class, due to their large range of AOE attacks. AOE is essential for certain boss fights and non-elite trash mobs, unless you want to clear individual mobs. This instance can be extremely tough in places, depending on player level, and careful pulling is of critical importance. It is far too easy here, when attempting to pull one mob, to accidentally pull more, and for the group to then wipe because they underestimate the mobs' strength. It is also extremely important to avoid opening too many of the graves inside the instance and unleashing all of the zombies at once, since doing so will quickly lead to the group being overrun.

The treasure available here is of good quality, with a large array of green items and a decent drop rate of silver and cloth, as well as some leather from the basilisks which accompany the trolls in certain places.

The instance is almost completely outside, allowing for the use of mounts.

This instance is one of the last major ones that players will experience before the Blackrock Mountain complex and the commencement of serious raiding. As such, also given the level of difficulty, it provides an excellent environment for players to develop the group co-ordination skills and depth of familiarity with their characters that they will need before moving on to such places. If you think you're good at running an instance group, ZF will provide you with an opportunity to discover whether or not that perception is accurate.

Zul'Farrak is a place of brown adobe walls and mud-brick buildings, similar to the troll settlements found in Stranglethorn Vale. It is impressive that trolls separated for thousands of years build a new town using the same construction methods known only to their ancestors thousands of years and miles away. It is said that an ancient weapon, Sul'thraze the Lasher, is held by the trolls within Zul'Farrak, and another legend says that a mighty demigod sleeps within a sacred pool inside the village. The Sandfury trolls attack anyone that approaches their city.[5]