Zul'Gurub is a five-player dungeon instance, released in patch 4.1.0. The original incarnation of the instance was released in patch 1.7.0 and was suited for 20-player parties. Zul'Gurub is the capital of the jungle troll tribes, led by the Gurubashi, worshippers of the terrible god, Hakkar the Soulflayer. Since the defeat of Hakkar and his Gurubashi minions, the city fell into disrepair and was mostly consumed by the jungle. The Gurubashi still persist, now backed by their former enemies; the Zandalar tribe, and once again they must be faced within the walls of the ruined city before they are able to fully regroup and strike back.

Zul'Gurub was the capital of the Gurubashi jungle trolls, a tribe that once controlled the vast jungles of the south. It was here that Jin'do the Hexxer summoned the savage loa Hakkar the Soulflayer into Azeroth. Of late, these efforts have begun anew amid an alliance between the Gurubashi and Zandalar trolls that seeks to establish a unified troll empire.

The influence of that savage civilization can be seen in Zul'Gurub's raised platforms and vine-covered arches, though, arguably, the most important part of the city's history is recent. It was in Zul'Gurub that Jin'do the Hexxer enslaved several high priests of the Gurubashi to aid him in summoning their dread god, Hakkar the Soulflayer, into Azeroth.

The presence of the Soulflayer presented a grave threat to the world, and, before Hakkar and his priests could dominate the continent, they were thwarted by the dedicated effort of heroes mobilized from the four corners of Azeroth. Jin'do was slain in the conflict, but his restless spirit burned with shame at his failure, and it drifted in the spirit world, seeking a way to return... and a plan.

Jin'do forced his way back to Azeroth to call on allies old and new: the worshippers of Hakkar, the exile Zanzil, and even Hakkar's former enemies among the Zandalar tribe. Together, they will rebuild Zul'Gurub - not for the glory of their defeated god, but to take his brutal power for their own, and see the troll race stand triumphant over a broken world.[1] 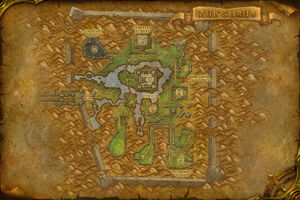 There are several bosses and minibosses in Zul'Gurub. All bosses except one have been in the game since classic lorewise. Their battles are also somewhat reminiscent of their old encounters. For example, Bloodlord Mandokir still levels up when he kills a player and dead players are brought back to life as long as ghosts exist in the battlearea.