Zul'rogg (or Zul'Rogg) is a forest troll warlord who was caught in the battle between Sylvanas' Forces and those of Varimathras in the Plaguelands.

A few of his tribesmen were attacked by Sylvanas's force and told her that their chieftain Zul'rogg would avenge them, if they were killed. Sylvanas would later personally encounter Zul'rogg, where he was surrounded by the rest of his forest troll forces.[1] 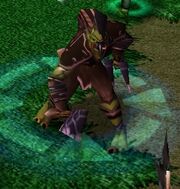 Sylvanas: "Forest Trolls! I hate them even more than those cursed dreadlords. Slaughter them all!"

Forest Troll: "You'll never get us all, witch! Chieftain Zul'rogg will hunt you down and avenge us!"